Borax is a naturally occurring mineral. It was first discovered in Tibet. Borax is an approved mineral for insecticides in the US since 1948.

Crystalized borax is used against all types of cockroaches in the US. It kills all roaches regardless of their species in a matter of minutes when ingested and a matter of hours when walked upon.

Borax kills roaches by dehydrating their gut when ingested with baits such as sugar. It also kills roaches that walk on sprinkled borax by acting like shards of glass that penetrate the exoskeleton and attack the nervous system. Roaches that come in contact with borax die within a few hours or a few days.

Borax is one of the household insecticides with multiple uses. Pure borax can be used to treat wounds or in the mechanical industry as a lubricant when mixed with other minerals and oils.

Borax is a common boron-containing mineral found in the ground. It looks like a white powdery substance similar to baking powder, salt, or powdered sugar. It has wide use in almost any industry and many household products contain a small amount of it.

Borax has a dehydrating role when ingested by roaches. The mineral also kills roaches that touch it without ingesting it.

What is boric acid?

Boric acid is a type of chemically-treated borax and insecticide. As regular borax, boric acid also kills all types of roaches. Boric acid is a potent borax formula that’s also water-soluble but that has been processed with hydrochloric acid.

Borax isn’t safe for people when ingested. It causes headaches, diarrhea, and even kidney failure. It’s illegal to use borax in food products in the US.

This being said, using borax indoors should be based on caution, especially in homes with children and pet. Kids and animals should not be left unsupervised with sprinkled borax and borax roach baits around the house.

Borax dehydrates the gut of roaches when ingested

The first action of ingested borax is that it dehydrates and destroys the gut of roaches. This is the primary method borax and boric acid are used against roaches.

No roach can escape a quantity of ingested borax. While it takes longer for some roaches to die after eating borax, they all die eventually.

Borax clings to the legs of roaches

Borax can be absorbed through the thin skin of the exoskeleton. Data suggests the crystal-like nature of borax powder acts like shards of glass cutting into the body of roaches that have walked over sprinkled borax or borax traps.

Borax remains active in the body of dead roaches

Borax has been known as the type of insecticide that keeps on killing roaches once they make it back to their nests. New roaches eat dead roaches all the time.

The ingested borax with the dead roaches eventually kills other roaches as well. This is why borax is spread out by roaches themselves, eventually killing the entire nest.

The first sign of borax working is a slow-moving disorientated roach. This type of reaction is also common for roaches that have come in contact with borax without ingesting it as it makes its way through the skin attacking the central nervous system.

Borax can kill some roaches instantly. When they ingest a large number of borax roaches die on the spot. However, many roaches don’t freely eat a lot of borax (unless mixed with some type of food bait).

It can take anywhere between a few hours to a few days for borax to kill cockroaches. The effects of borax might only be visible after a few weeks since not all individuals in the nest eat it at the same time.

It’s estimated that the effects of borax in a home infestation might take up to a few weeks to see. 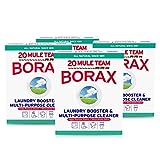 Mixing borax with food as bait is the ideal method of getting rid of cockroaches. Various types of food attract roaches.

While roaches can eat borax without bait, this rarely comes with the quick results most people are interested in.

Here are a few common foods and combinations for borax against roaches with quick results.

Flour attracts all types of pests including roaches. Mixing 1 part flour and 1 part borax is the recommended solution to use bait around the house.

The mix can be strategically placed in locations such as room corners and under the furniture where roaches have their travel lanes towards the kitchen.

You can add a large spoon of peanut butter on a piece of cardboard and sprinkle it with borax.

As with other borax-based baits, this should not be considered in homes with pets.

The final mix can be placed in areas of the house where you see roaches or next to the nest.

Multiple people who’ve successfully used borax against roaches recommend sprinkling it on meat, particularly on minced meat which is easier for roaches to swallow.

Cooked meat attracts roaches together with raw meat. You can microwave minced meat for up to 3 minutes, add it to a piece of cardboard and sprinkle it with borax to make attractive bait for roaches.

Baking soda is not the ideal mix for borax as it’s already used against roaches on its own. It’s best to add a tastier bait to attract roaches immediately.

Can you mix borax with water against roaches?

Borax can also be mixed with water to create homemade borax sprays against roaches. While this dilutes borax, it’s still a very efficient solution against roaches, especially in areas where you cannot fit bait, such as in-wall cracks.

Up to 8 tablespoons of borax are added to a standard 10-ounce sprayer. The sprayer needs to be shaken before use.

If you can access the nest of roaches you have better chances of killing them by spraying borax and water instead of sprinkling borax on cockroaches before they escape.

Spray hard-to-reach areas of the house

You can spray borax in multiple indoor and outdoor areas known to attract or to conceal roaches. Here are a few common places to spray it on.

Should I sprinkle borax on the carpet?

Sprinkling borax on carpets is not recommended.

Some people sprinkle borax on carpets and vacuum it up after a few minutes to try and kill roach eggs. However, this method isn’t safe as all borax particles might not be picked up by the vacuum cleaner.

The toxicity of borax is quantifiable when it starts to rise with the dust on the carpet when walked on.

Is borax dangerous when used indoors against roaches?

Borax can cause health problems such as vomiting, nausea, and kidney failure. It’s best to avoid direct skin contact. You should not inhale borax and you should also wash your clothes if they get in contact with borax.

You should always wash your hands after using borax.

How much borax do you need to kill roaches?

You only need a small amount of borax to kill roaches. While borax baits can be as small as 1 tablespoon borax and 1 tablespoon sugar, it only takes a very small ingested amount for the roach to die.

A larger amount of borax is needed when it’s mixed with water and used as a liquid pesticide. Water dilutes borax and adding a few tablespoons to a sprayer is recommended.

How to use borax safely and get rid of roaches

Borax kills roaches by dehydrating their gut. It also kills roaches from the outside when they walk on it as it cuts through the exoskeleton affecting the nervous system.

It can take as little as a few seconds for borax to kill a roach. In most cases, it takes hours or up to a few days for it to kill roaches as it’s ingested in small amounts with bait.

It might take up to 4-5 weeks for borax to kill all roaches in a home. Some roaches might appear dead while still alive. Roaches don’t breathe through their mouths and they might continue living up to a few weeks of their heads being affected by borax exposure.

Commercial pesticides also contain borax or boric acid. They work on the same premises as pure borax affecting the digestive system gradually until the roach dies. Warmer weather brings a lot of joy with outdoor activities, grilling, and extended family time. Unfortunately, spring and summer also bring ants. One of the possibilities to kill them is bleach, but does bleach kill ants? The simple answer is no, but bleach can still be helpful to repel them. How Ants Survive One reason… Aphids are known to live in temperate climates which means they need to overwinter. It seems that there are thousands of aphids around in the spring, but many overwinter and only emerge in the spring. Aphids are some of the most resilient insects when it comes to cold weather. These insects are known to survive… Cats are adventurious creatures and can often be found exploring their environment, which sometimes includes the slimy trails of slugs. While it is not likely that your cat would eat a slug, accidents can happen. So, are slugs poisonous to cats? The short answer is no, slugs are not generally considered to be poisonous to…