The cockroach is one of the most resilient insects on the planet, able to survive nuclear fallout and can walk around without a head for over a week. Bleach, on the other hand, can supposedly kill just about anything, given time and proper application. When an unstoppable object meets an immovable wall, one has to give. So does bleach kill cockroaches?

Bleach will kill a cockroach if you drown the thing in it or simply hose the cockroach down until it accidentally ingests some of it. As far as a contact kill, not even bleach is strong enough for that.

Eradicating cockroaches is no easy task, especially if they’ve established a foothold on your territory. Bleach is an effective roach deterrent, however, so all is not lost just because saturating a cockroach won’t kill it.

Cockroaches can survive fifteen times the amount of radiation exposure that a human can. Spraying one with bleach—even undiluted pure bleach—probably amounts to a horrible smelling bath from the roaches’ perspective.

What Happens If You Spray A Roach With Bleach?

Most likely it will irritate it and cause it to scurry off, often in the direction of your toes—cockroaches can run up to 3mph, sometimes faster—so if the purpose is to make it run, by all means, spray it with bleach.

What it will do is make the cockroach and all of its buddies vacate the area until such time as the bleach smell tapers off. Cockroaches do hate the smell of bleach. The olfactory receptors on their antennae are adverse to it and a roach will avoid it all costs.

The problem with bleach is (no matter how much our eyes water at the smell of it) that it will dissipate in a short period of time. Regardless of how much you lay down, cockroaches will eventually return to traffic that area or to hunt water or food.

Like their nymphs and adult brethren, cockroach eggs aren’t so easy to kill. Given time and a good soak, bleach will do the trick. Cockroach eggs, unfortunately, have another layer of protection that their hatched relatives do not, and it’s called the ootheca.

The ootheca is a hardened shell casing that encapsulates the cockroaches’ eggs. If you decide to soak the eggs in bleach (not recommended), you’ll have to find the ootheca.

There are four common varieties of cockroach in the United States and Canada and they each lay a specific type of ootheca:

Soaking the ootheca in bleach will certainly kill them, however, it’s an unnecessary task that would require locating them, removing them, and placing them in a vat of bleach until they succumb.

Uses For Bleach In Repelling Cockroaches

While bleach serves very little purpose as a direct method of repulsion or death, it has some indirect uses. For one, roaches hate the smell of it and will vacate the area quickly until the smell dissipates.

Bleach is very effective at killing viruses, bacteria, and fungi, things that cockroaches spread in abundance. So while it won’t directly kill them, it is an effective deterrent and sanitizer.

Do Any Household Products Kill Cockroaches?

There are several products typically used or found in the home that are effective at killing cockroaches or at least deter them more effectively than bleach.

A cockroach can withstand 900 times its body weight before being crushed, so while a boot is effective, it’s probably more effort than you think. Also, killing one hardly kills the nest.

Essential oils catch a lot of flak, primarily because some people believe they’re a cure for everything. While that’s not the case, they are useful in curing your home of cockroach infestations.

Essential oils aren’t the miracle cure for everything that people make them out to be. They’re also unregulated, so be careful when applying them and never let any get on your skin or around your pets.

It is an effective deterrent similar to bleach in that the smell is not attractive to cockroaches at all. Its best application would be in areas where food is stored (remove the food before spraying it) or inside and behind dressers.

It’s a super-spreader of carnage for the roach population. Also, you can make it into appetizing little roach balls:

The cockroaches won’t be able to resist the lure of the sugar content. They’ll consume it and die while the other cockroaches will consume their dead friend because he smells suspiciously like sugar and flour. They’ll die too.

Boric acid works as a dehydrator. Roaches can typically go about a week without water. However, two days without water will make them lethargic and slow.

As the Boric acid leeches the water from them, they’ll die far quicker than the average week-long period.

Boric acid is a derivative of Borax, which is a household chemical commonly used as an additive for laundry and/or dish detergents. Borax kills cockroaches in the same way that Boric acid does, by penetrating the exoskeleton and dehydrating the roach.

There are several good borax recipes but the most common ones involve sugar, cocoa powder, or peanut butter.

Borax is far more common in houses than boric acid. While boric acid is easy to buy, you may have all the Borax necessary under the kitchen cabinet.

Baking soda works to kill roaches by bubbling up inside their digestive system until the cockroaches’ insides burst. No, it won’t be a disgusting explosion, probably not even noticeable. However, other cockroaches will eat it and spread the love from there.

Primarily used as a pool cleaning chemical, DE is just as effective as Borax and Boric Acid. It works in the same way too, penetrating the exoskeleton and dehydrating the roach. Also, like Borax and Boric acid, if the roaches eat their dead compatriots, they’ll die too.

The best way to use DE is to get the EPA-registered, food-grade variety and mix it with powdered sugar. spread the mixture in high-traffic areas and wait for the carnage to begin.

Now that the “does bleach kill cockroaches” question is answered, it may come down to abandoning household solutions to effectively eradicate an infestation.

German cockroaches are especially crafty and will often not return to or ignore some of the household baits listed above. To kill them, either a professional exterminator may need to get involved or purchasing the right pesticide for a DIY project.

Ortho Home Defense Killer: This stuff is not suitable for pets and small children and should be applied while wearing a mask or with some form of ventilation. It kills well and it kills quickly. Not only does it eliminate roaches, but nearly everything else that crawls around on six or eight legs. It also lasts three months and is best applied along the entire perimeter, inside and out.

Advion Syngenta Cockroach Gel Bait: This is most effective when applied in suspected areas. It’s an attractive bait for roaches, so they’ll come to it. It’s also dangerous for pets and small children, so make sure it’s placed in an area where neither can reach.

Combat 12-Month Roach Killing Bait: These bait traps are similar to the gel bait. They serve as an attractant for roaches who come, eat, and return home to die and spread the poison. This method is the least dangerous to pets and children, although neither should be allowed to handle them. 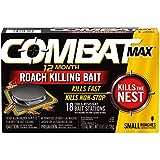 Does bleach kill cockroaches? The simplest answer is no, although it can do so in large amounts by simply drowning them or if they consumed it in some way. However, it is an effective deterrent, albeit in a very temporary manner.

If it’s a DIY kind of project and you don’t want to incur the extra expense of hiring an exterminator, there are plenty of household chemicals that will do the trick far more effectively than bleach, such as Borax, Boric Acid, Baking Soda, and Diatomaceous Earth.

Fortunately, bleach is still an effective remedy because using it to clean the house is a long-term solution.

Roaches don’t like clean areas and diluted bleach is great for killing the viruses and bacteria that roaches spread while serving as a preventative against their return. Yes, flies require sleep just like humans. In reality, their sleep habits are surprisingly similar to ours. A fly’s daily routine is to actively carry out fly duties during the day, which mainly entails feeding, mating, and naps if necessary. They also need to rest and recharge at night, just as we do. Most of… Have you ever seen a swarm of flying ants? The ones that sprout wings and fly to mate in the spring or summer, right before they die. Well, sometimes these winged ants will happen to find their way into your home during this time period – if so, don’t worry it’s most likely by accident!…